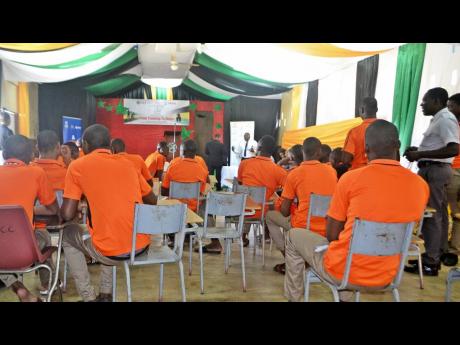 YARD Empire’s mission of using the arts to influence positive change in juveniles in the island’s correctional facilities is being accomplished based on reactions to their involvement with 30 wards of the state at Hill Top Juvenile Correctional Centre in Bamboo, St Ann.

A seven-week training programme culminated with the juveniles presenting From Training to Stage at the centre on Monday, during their graduation ceremony to mark the end of training. From Training to Stage was developed out of A New Path, an initiative implemented by the Organization of American States (OAS), TRUST for the Americas, and funded by the United States Agency for International Development (USAID).

The wards and some staff members were trained by YARD Empire in the techniques of improvisation in drama and created and presented several dramatic pieces, which went over well with the audience at the ceremony.

Their involvement in drama would have opened the eyes of some of the wards to a career in the arts after their confinement.

Immediately, though, several of them have started showing positive changes brought about by their involvement in the programme.

“Yes, there is change,” admitted Faydene Ferreira, superintendent in charge of the centre. “I see boys trying to intervene in conflicts in a positive way, to separate and to make peace, so I’m really seeing it coming out in their day-to-day activities and living inside the dormitories.”

Ferreira said the programme has been very useful, as the drama pieces, while showing the negative and the positive, show the boys the right way to go.

“And it pulls out their creativity so they can identify their skills which can provide a future career path for them, so I think it’s very important and it’s very good.”

YARD Empire’s Terry Salmon worked long hours with the boys, overcoming several hurdles, to get them to the stage where they were able to present some decent pieces, eliciting rounds of applause and several delightful moments of laughter.

Keith Byefield, a director of YARD Empire, said based on previous experience with similar facilities, the boys would have benefited.

“What I do know from other programmes, and I am sure these boys are as equally talented and gifted, is that it actually unearths talent. Some of them who didn’t even think of drama or the theatre as a means of livelihood are now coming to the fore. And their dancing and singing talents came out as well. I know the boys will do well. It’s an excellent programme and it’s actually accomplishing the mission that we set out to achieve, of course, with the assistance of the OAS, the Trust of America and funded by the USAID.”

Six staff members have been trained to carry on working with the boys, now that the initiative has ended.

All programme participants were presented with certificates.

Meanwhile, State Minister in the Ministry of National Security, Rudyard Spencer, who brought greetings, said the culmination of the initiative marks a significant day in the life of the youngsters.

“I believe, very passionately, that these children have the ability to go very, very far. They will be able to make a positive contribution to their communities,” Spencer noted

Courtesy of  The Jamaica Gleaner

About the Author: Terri

This site uses Akismet to reduce spam. Learn how your comment data is processed.